Carnaval is like the Spanish Mardi Gras, and it just so happens that the city which celebrates it the most, Sitges, is just a short train ride away from Barcelona-how convenient!! The celebrations last from Thursday, Feb 11 until Wednesday, Feb 17, and I went on Saturday (The biggest day is Tuesday)! 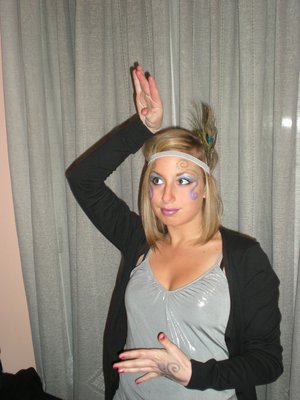 Here is a picture of me all dressed up with a peacock theme- crazy makeup and feathers and all! Kristina and I didn’t realize how similar it is to Halloween--most locals were in full out costumes, and little kids were dressed up during the day. The Carnaval celebration was CRAZY! There were like a million people on the train to Sitges, and we didn’t even go until 11pm! So there were people everywhere-a giant party on the beach, lots of dancing in nearby bars, dancing in the streets! So we danced the night away, and hopped on the train back to Barcelona at about 5am! And I made it home safe and sound with everything……………except one shoe!!!! My flat slipped off in the midst of all of the pushing and shoving to get back on the train to Barc, and I would have gotten trampled for sure if I had gone back for it! Oops! Good story though! 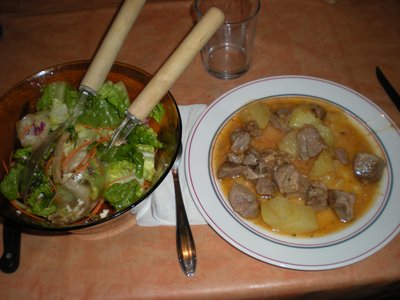 Mercé has been making some scrumptious meals lately! Here is a picture of a yummy beef-stew-like plate. It had chunks of really tender beef in a semi-thick broth with super soft potatoes and onions! And of course the salad!

Last Thursday Mercé made a typical Catalan dish that is customary to eat at the start of Carnaval. It consisted of three main parts (plus some more!)…..an omelet-like egg with slices of Butifarra sausage[Butifarra=SO GOOD!], Pan con Tomate (bread rubbed with tomato, olive oil and garlic), and Coca de llardons (a flaky dry flatbread with cinnamon and sugar and almonds on top). I love when she prepares these traditional meals! Another common meal that she often whips up for us is Butifarra amb Mongetes (pork sausage with fried white beans, olive oil etc)--> delicious!

So everything was really good food wise……..until Sunday. We woke up in the middle of the day after our long night of Carnaval celebrations and Mercé was cooking up some stuff, and had the table set with her special FC Barcelona tablecloth, plate, napkin, and champagne glass set (she is a true fan!!)! She had made this big lunch with chicken, salad, bread, potato chips, and gambas (shrimp)! Eek! The shrimp were whole with heads and eyes and stuff and I had seen them in paella, but had yet to try one! So I told Mercé that I was a little scared, but that I wanted to give the gambas a chance. So she is laughing at me as I’m preparing myself to eat this thing-I twisted the head off, and peeled the legs and stuff off, and there were juices squirting everywhere! And then it took me a few minutes to even put it in my mouth! So I finally did—and it was just awful---It was juicy and fishy and I GAGGED and I just could not swallow it or chew it, and Mercé told me to spit it out, so I did!!! I felt so bad! But she didn’t care at all-she said she was proud of me for trying it! Then we had this big crème filled cake that is a Carnaval tradition, but i forget the name. She cut us giant pieces, and really it wasn’t very tasty, but it’s still a lot of fun to take part in these traditions!!!....here's a pic! 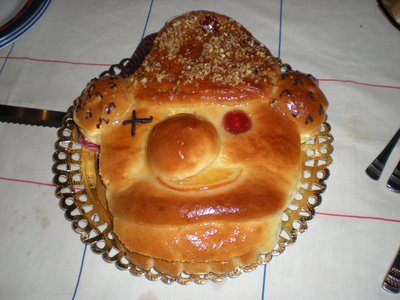 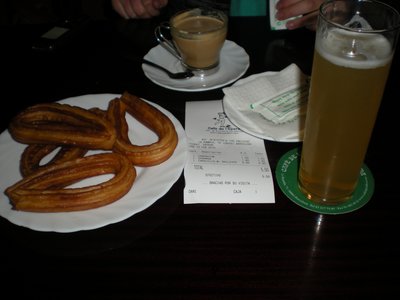 The other day I went to Café de L’Opera, on Las Ramblas. This café has been around for over 100 years and is a common spot for people to go pre or post Opera, because the opera house is right across the street (hence the name). So what’s nice about this place is that even though it is on the famous, touristy, over-priced Ramblas, it still has a delicious, reasonably priced menu and a lot of history and personality, too! I got a clara (part beer, part lemon soda), and churros! They were the best churros ever!

So many exciting things coming up! Wednesday I am going to see a Pedro Almodovar movie- Todo Sobre Mi Madre. It’s not new or anything, but I have just been dying to watch one of his movies! And I signed up for a workshop about teaching English abroad for the following week! And then…ROME…Amsterdam-Brussels….Katie & Andy visit…Valencia for Las Fallas…Prague-Vienna….Figueres with the Pilkingtons….weekend in Barcelona with fam! Then it’s April! Beach weather! (I am definitely ready for beach weather in case you were thinking it was warm here, you should know that last night I slept with my mittens on! It was 10 degrees Celsius during the day INSIDE THE APARTMENT! No worries though--it’s the culture!) 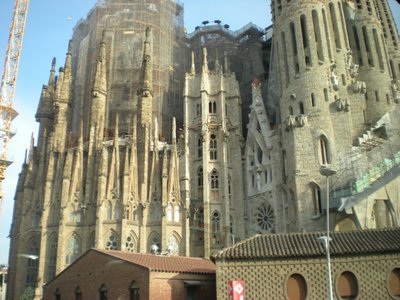 Here's a quick pic of La Sagrada Familia, just because it is so beautiful and so close to where I live!!! amazing!

Wow, this semester is just passing me by!

sounds great micheline!!! Great story about the shoe! And I am so proud of you trying the gambas-- I don't think I could eat something that was looking back at me! EEks! Happy Valentine's day cutie! Love you so much! Great pictures! You are a beautiful peacock! :-)

Love reading your entries!! Enjoy the experience and keep on having fun!