Before I came to Barcelona, I think the number one touristy thing I was looking forward to seeing was Gaudí’s Parc Güell, and I went yesterday—its only like a twenty minute (albeit all uphill) walk from my apartment! Anyway, it completely lived up to everything I was expecting, and more!

Here are two pics of the entrance to Parc Güell—such funky, beautiful structure—the epitome of Gaudí’s Modernisme style! It sort of feels like you are walking into a lifesize game of CandyLand. 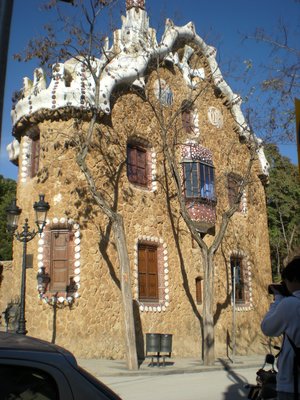 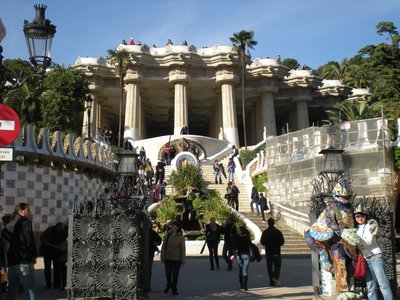 There are just acres and acres of green plants and trees and shrubs with cobblestone stairs, pathways, and amazing structures and architecture weaved in. I’ve got lots of pics to share here!!! Tons of colorful mosaic artwork…some more really cool musicians doing their thing (see video!)….artists painting on the spot…a giant plaza with mosaic seating all around, overlooking the beautiful entranceway…and of course the VIEWS! Amazing amazing views of the entire city of Barcelona. It was such a beautiful, clear day, too, that the picture doesn’t even do much for everything in sight! Haha can you tell I loved this place!? 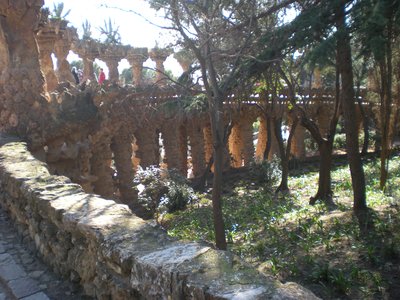 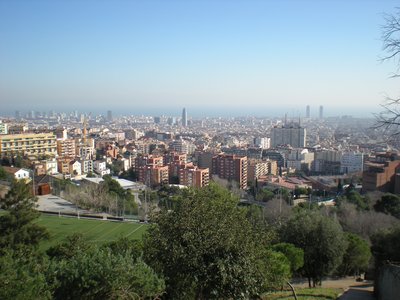 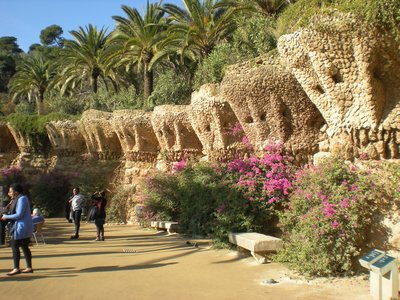 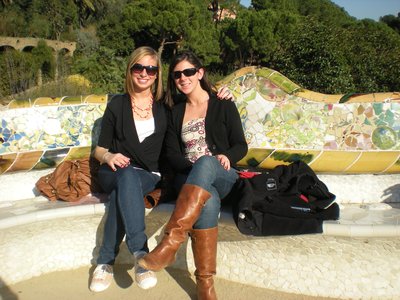 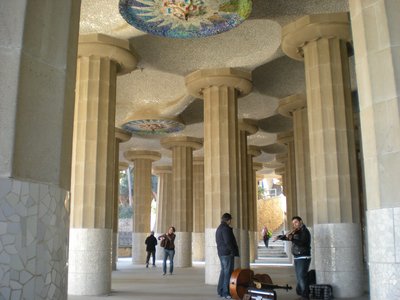 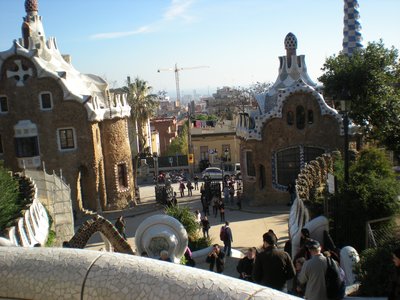 I have also had my share of (minorly) frustrating experiences that come with learning a new city…mostly transportation issues! The metro and bus systems are actually really great, and there is also a ‘Nit Bus’ system that runs 24/7, but it can get a little tricky! A few nights ago, my friends and I were on the Nit Bus for two hours and when we finally got to our destination (a club), it was like 3am and therefore too late to get in for free, so we would have had to pay 20 € just for cover!! Haha Hell no! So we turned around and went home! Oh well!

A few funny dinner stories….The other night Mercé left us leftovers of that white fish (from my last entry) for dinner, but she wasn’t around during dinner time. I tried it again, but after two bites I really couldn’t do it no matter how hard I tried, but I didn’t want to make her feel bad that I didn’t eat it, so Kristina and I threw a piece out and took it to the dumpster! Haha I won’t do it again!!!!! Last night she made friend calamari, and I actually liked them this time! They sort of had no flavor besides fried-ness and they didn’t have that chewy tendon-like texture that I have hated about calamari I’ve tried in the past! Yay seafood!

The other night we happened upon this little bar with fun live music! And I played with the band! They just gave me these little sticks to bang together—so fun!! 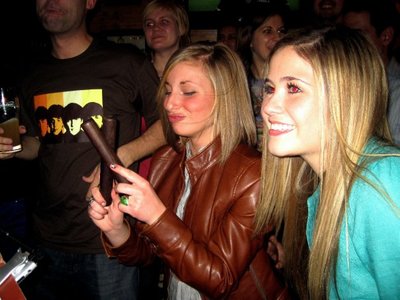 Last night we watched the jets-colts game (a little dose of American football!) at an Irish Pub. Anyway, I had Guinness for the first time…actually really liked it! Sort of like a meal in a glass, but I really liked the flavor and I wasn’t expecting to (kind of like mapley!)………. but I think sangria is still my favorite!

Some other random observations I’ve made around the city…..

-There are dogs everywhere! Everyone has them and they all take them everywhere! Restaurants, malls, metro, stores...I kind of love it! [Katie, you would be in heaven!]

-There is American music playing just about everywhere. I guess I was expecting Spain to have its own popular songs and artists, but apparently not so much! Haha of course there is some Spanish music here and there…But for example, I was in a really authentic Spanish/Mediterranean restaurant the other day, not much English was spoken, but they had someone like Fergie or Lady Gaga playing! So funny!

- Shopping malls are totally different. I can’t really explain how, but they like basically categorize them. There is one really popular shopping center called El Corte Ingles, and there are a bunch of them all around the city. They each have about 4 or 5 floors, with a bunch of different stores in them, but all mixed together. So an equivalent in the States might be like one big building with Abercrombie, Victoria’s Secret, Barnes and Noble, Forever21, Filene’s Basement, Sephora. all mixed up between a few floors but with very little distinction between sections. It’s sort of like a giant department store, but each Corte Ingles is different. One is famous for having a lot of books, the other for clothes, another is really high end etc…very different!

And guess what, my nails are long! Yahoo!