The Queens of Salad

The past few days have been pretty rainy so I haven’t really covered any new ground in terms of exploring the city lately. But this morning was sunny so I went on my first run through the city! To the water! It was so beautiful, and then Kristina and I wandered through a beautiful park and through the Born neighborhood of Barcelona (a trendy area with lots of tapas bars & restuarants). We got pretty lost, but I was loving it! I secretly wanted to get lost, just so we could find our way back!

Tuesday was my first day of classes and they are great! I’m taking Spanish Language, Business Spanish, and International Econ (this one is taught in English). The classes will be easy As, but at the same time I’m actually excited for them and will probably learn a ton. I think the Span Language speaks for itself, but the Business Spanish class is particularly cool because the class itself is so international: 3 Colombians, 2 Mexicans, 4 from China, 4 Americans, 1 from Portugal. We’ve only had one class and already it’s been pretty cool to hear how perspectives on business principles and the workplace change from culture to culture! 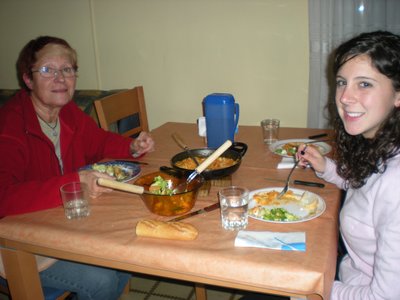 I still haven’t gotten to try paella, but Mercé has cooked us seafood the past few nights! For those of you who don’t know, I have never really eaten seafood. So I’m trying to have an open mind, and I am going to at least try everything! Here is a pic that I took of Mercé and Kristina eating our first seafood meal-pasta and some sort of sauce with calamari. (not sure how I feel about the texture of calamari, but I ate two rings!) Y su ensalada deliciosa, por supuesto! Mercé calls Kristina and I “Las Reinas de Ensalada” [The Queens of salad] because we eat a giant bowl of her salad like everynight! 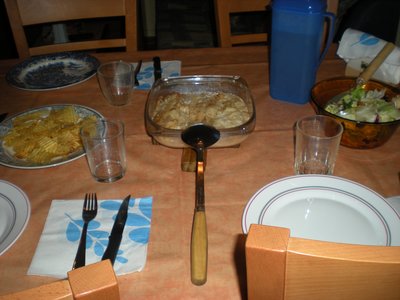 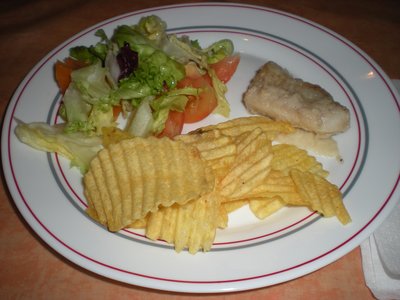 Here are a few pictures of last night’s meal: some sort of white fish with bread crumbs, ensalada, and potato chips (how funny!!!) It was good...sort of oily but not too fishy tasting…Maybe haddock? No sé, and I didn’t want to ask because I told Mercé I’d try it again tomorrow! Next up……paella!! (I hope!)