So this past weekend my program went to Sevilla! Sevilla is the capital of picturesque Andalucia in southern Spain, and has a reputation of being exactly what you might picture a Spanish city to look like. Food, drink, tapas, and just about everything is a lot cheaper in the south, and the people of Sevilla take their Spanish traditions (like midday siestas) a lot more serious than northerners…and they are known to be a lot more family oriented, lax, living a ‘work to live’ lifestyle. So needless to say, I went in with some pretty high expectations! And I’d say overall the city lived up to them pretty well---it maintains a perfect balance between being a quaint town and a bustling city--with a narrow street, small European city kind of feel!

Friday we toured the Cathedral, Giralda, and Reales Alcázares. The Cathedral was really something---it’s the third biggest in all of Europe, after St. Peter’s in Rome and St. Paul’s in London! One thing I loved is that, typical of Sevilla, there is a courtyard filled with orange trees in the center of the Cathedral. The pictures don’t do any justice for the amazing Royal Chapel, entirely plated in gold, and the beautiful superhigh ceilings. I actually learned a ton on this tour because the Cathedral was built in the 15th century, on the foundations of a Visigode church, so our tour guide dug into the history a lot. The Cathedral also is the official site of the Tomb of Christopher Colombus as well as his son so we saw both of those. Pretty cool! The Giralda Minaret is connected to the Cathedral and it is a symbol of Sevilla. It has a super high belfry tower which we climbed 35 floors to catch some amazing views of all of Sevilla! 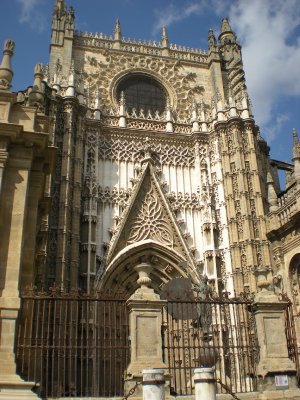 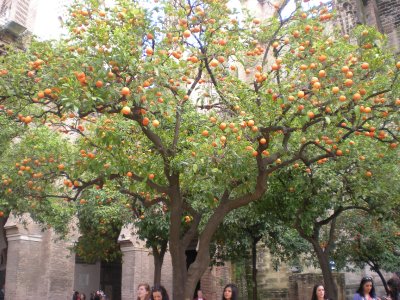 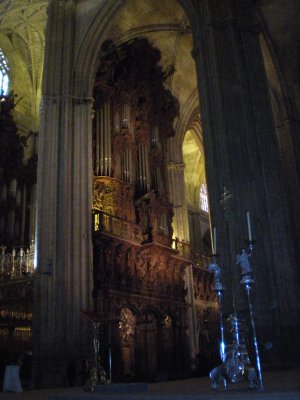 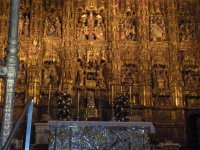 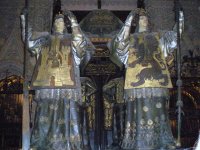 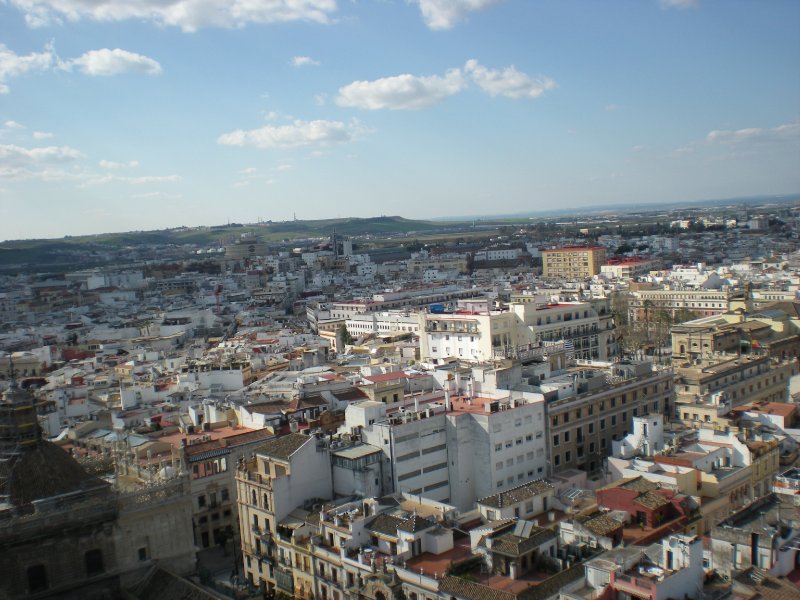 Reales Alcázares is a super old fortified palace that is now used as a residence for the Royal family. I thought it was pretty cool to learn that the main level of the palace is open to tourists until the Royal family calls and says they are coming to Sevilla, at which point Alcázar is cleared of tourists and the gates are shut. The many rooms, patios, halls, and gardens all have such different styles and still consists of a lot of original 13th and 15th century architecture. We walked through the royal gardens a bit before getting shooed away by the guards, but they were just incredible—orange trees, vines, fountains resembling mini volcanoes, interesting trees. It also helped that the weather was perfect!! 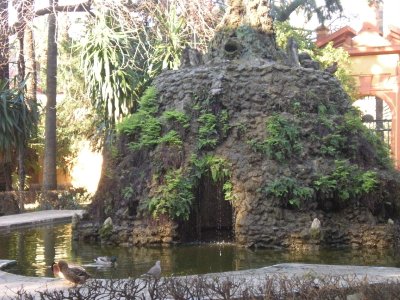 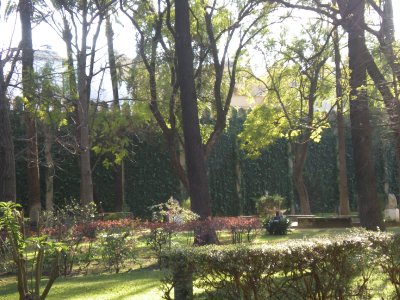 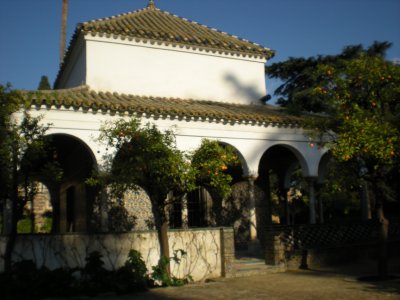 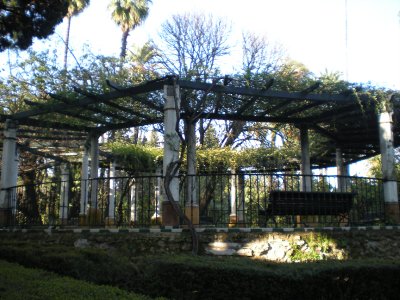 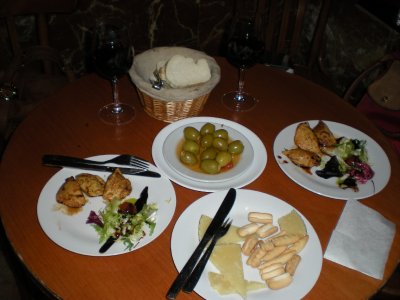 Saturday we had a day trip to Cádiz, an Atlantic beach and port city about 2 hours from Sevilla. We took a bus tour and walked all around the small city with our local tour guide, who also brought us to the Cathedral of Cádiz..yet another beautiful Cathedral! With beautiful 70o weather it was the perfect day to stroll around, stop for some lunch at an outdoor café, and hit the beach for a bit! Buenísimo! 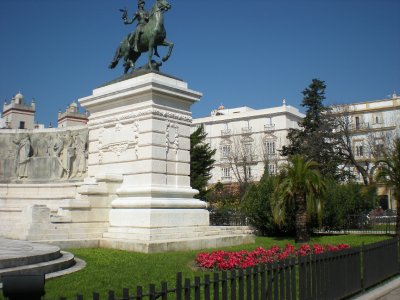 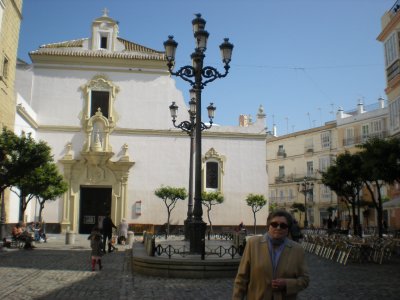 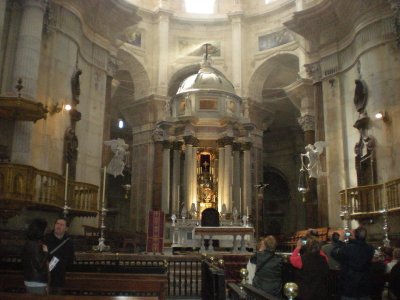 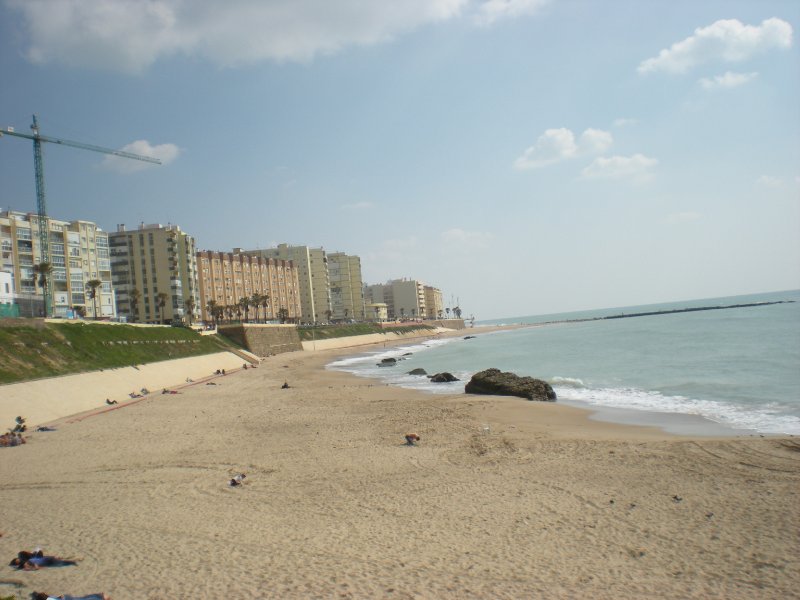 Saturday night….TAPAS HEAVEN! A group of my friends went to a delicious tapas restaurant and we ordered a great spread of tapas…Chicken breast in a creamy almond sauce, fried zucchini, traditional patatas bravas, sliced tenderloin in a Roquefort sauce, spinach croquettes…and with some red wine in an oversized glass, it was the perfect thing!

Sunday was my favorite day of all…..BIKE TOUR! It was so perfect because I felt like I finally got a real taste of Sevilla and many snapshots of everyday life there! We went all over: through the site of the 1992 World Expo, along the Guadalquivir river that runs through the city from the north to the south, through the typical Santa Cruz neighborhood, the Plaza de España, and, my favorite, through the Maria Luisa Park. This park was so awesome—sunny day, grass, palm trees, orange trees, tons of people strolling, chilling, hanging out..it was sooooo great!! 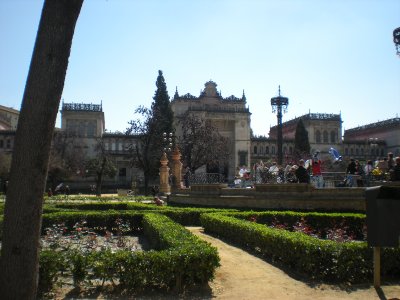 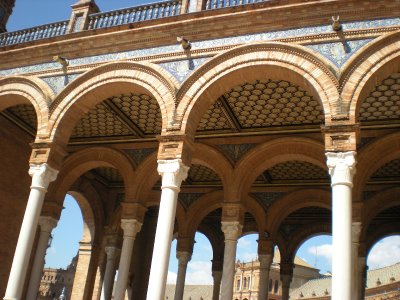 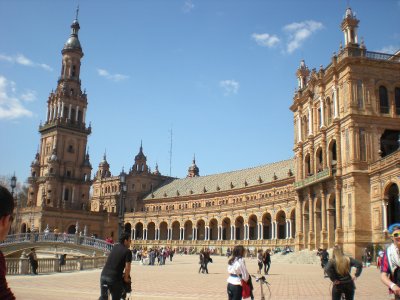 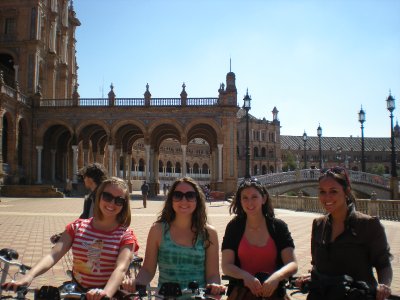 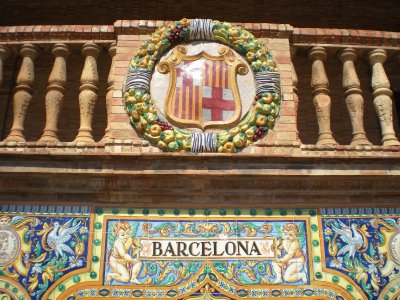 So it was just a fantastic weekend, yet again, of my European travels! (However I am still glad to call Barcelona home!!!) And today Katie and Andy get here for the week! So great! What a month!!!

Mikey Are you sure your not a travel agent?! Keep writing** your blogs are so interesting **so much detail!! Maybe your a writer!! see you real soon!! Muah Mamma

WELL! What a morning I am having reading your blog and watching all your doings! I want to be there with you! Keep writing about your travels ! When you go to Italy, I hope you can find my family and be seeing good friends! Please try to see them.

I miss you soooo much! Ti amo my little peanut!
Love you x0x0
wish I was with you... I am so happy that you are seeing so much! Love Mimi