Overall--->Rome was SO GREAT! I don’t think the weekend could have worked out any better!

Intro---->So this trip to Rome was with half of my program and half the staff, so like 70ish students and 3 staff members. We went Friday to Sunday night, and had a few planned activities and tours, but mostly free time. I was pleasantly surprised by how walkable everything was; there are tons of tiny little streets and cute alleys, but with a map at hand, the city was extremely navigable-I think more so than Barcelona! And I saw so so so many historical/beautiful sites in such little time!

So for the highlights/ a little play-by-play………..

Friday-->Our plane was a few hours late because of the strikes in Paris, so we had a rough start…dropped our stuff at the hotel, had 20minutes to find lunch, then we had our bus tour! Since we were late, the bus tour ended up being after it was already dark out! Shucks! After, I walked to the Trevi Fountain with a few friends, and of course threw a coin over my left shoulder for good luck! 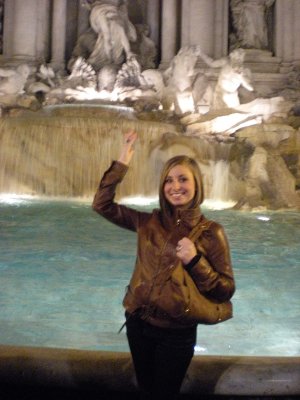 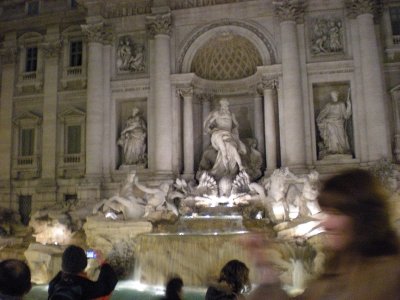 And then….dinner! We found a cute little restaurant with candlelit tables outside and had a nice long dinner for our first real meal in Rome! First course…gnocchi pomodoro! Second course….Pizza Margherita! With a few glasses of Merlot…perfecto! I kept it pretty simple for this meal, but can you really go wrong with a nice plate of gnocchi and classic margherita pizza in Italy? No! It was great! 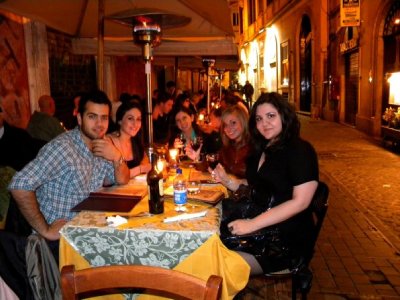 Saturday was the most beautiful day I have seen in Europe. It was sunny, warm, a little breezy! Our adorable tour guide took the group to the Colliseum, where we got to skip all of the lines and have a tour with walkie talkies so we could stroll at our own pace but still hear everything! The Colliseum was enormous, and so cool, I learned tons! 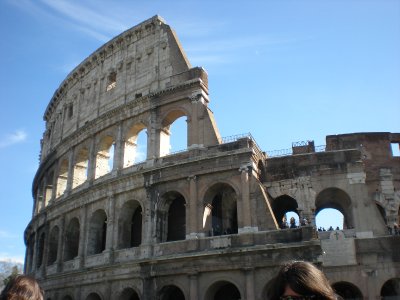 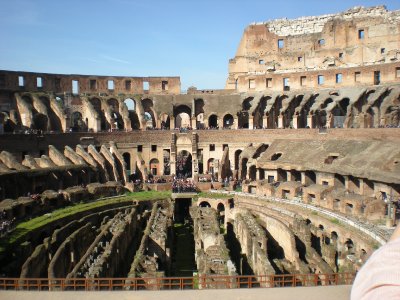 The tour continued to the Forum, the ruins of the old city center of Rome. I don’t really know what to say about this besides that it was really interesting to see and to get an idea of all the history we were surrounded by! And it was beautiful! 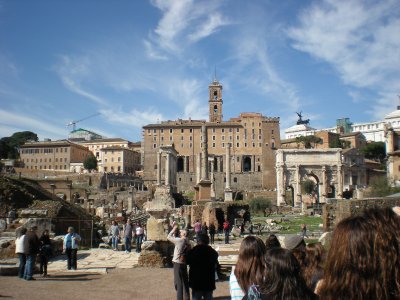 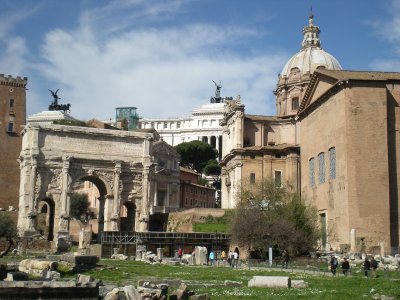 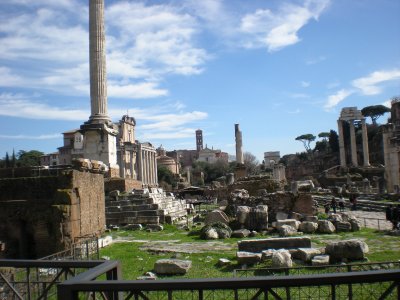 Since we had the rest of the day for ourselves, Kristina and I made a master route around the entire city, and did EVERYTHING!!! We strolled to the Pantheon, and sat in the piazza right outside it, where we enjoyed our first gelato in Italy ever! I got a mix of pistachio and caramel crema! Yum! 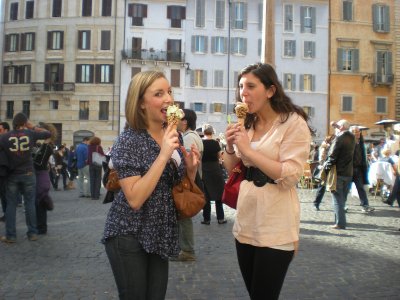 And here is a pic of the inside of the pantheon... 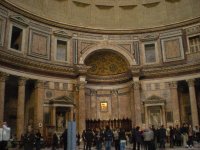 From there we went to Piazza Navona, where we wandered up and down the rows and rows of artists selling beautiful acrylic and watercolor paintings! Precious! Then…lunch! Instead of another sit down meal, Kristina and I shared a big spinach-fresh mozzarella Panini, with a cup of red wine to go! So we meandered onto our next sites with a Panini in one hand, plastic cup of wine in the other! Grazie! Non che male!! 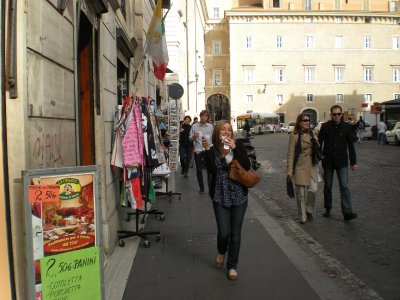 The Spanish Steps and the Trinitá dei Monti came next…..Great views of Rome, and the Trinitá dei Monti was just beautiful, and one of the more peaceful touristy churches. And I lit a candle there! We spent the rest of the afternoon hitting some other important stops, including a nice big park! Our feet were dirty and tired after all of our walking on Saturday, but we still had lots to cover on Sunday! 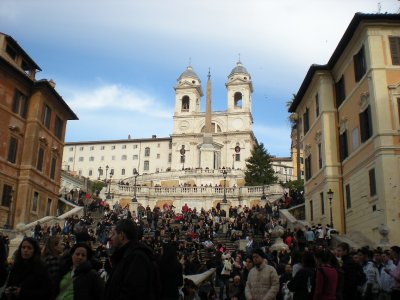 Sunday we went to the Vatican….QUITE a day!!! We got there at 9am (a little delayed) and waited in line for a little over 2 hours to get into the Vatican Museum because it was free that day so everybody goes!! By the time we got into the museum, we had just over a half hour to make it through the 55 [crowded!] rooms of the museum, see the Sistine Chapel, and make our way to St. Peter’s Square where the Pope was blessing the crowd and giving a speech at noon!!! SO.. we just about jogged through the museum, still managing to snap all of the necessary pics while we weaved through the slowly moving museum-goers! The Sistine Chapel was very beautiful though; the whole museum/building was just so detailed and gold and grandious, and gaudy! After the Sistine Chapel, we got to the museum entrance, and then realized we had to backtrack through half of the museum to catch the shortcut to St. Peter’s Square! We At this point we had exactly 8 minutes left until the Pope was giving the blessing! AHH! So…we ran! Back through the Sistine Chapel, and finally we got to the square literally JUST IN TIME!! Couldn’t have been more perfect! So we saw him speak, got our rosary beads blessed, and then saw the AMAZING St. Peter’s Basilica, and St Peter’s tomb. Those two gave me chills! Some artwork and ceilings---> 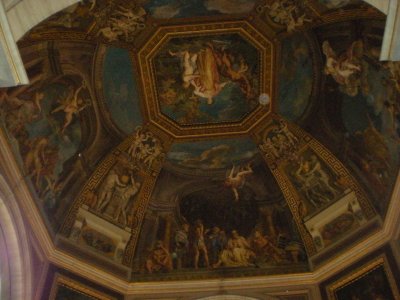 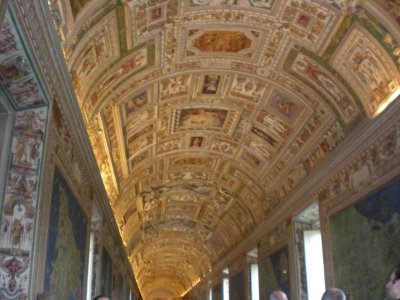 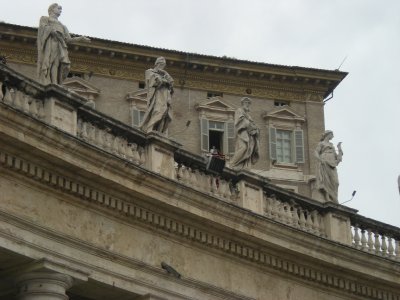 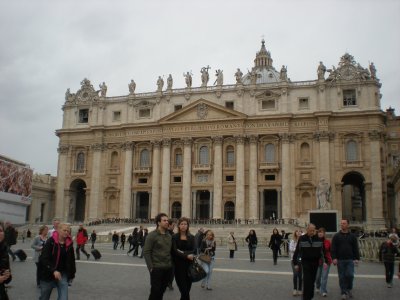 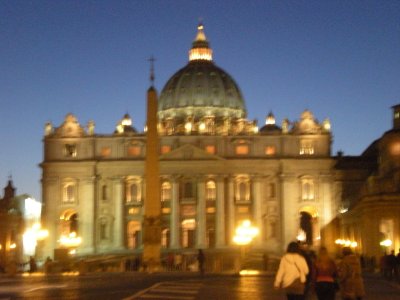 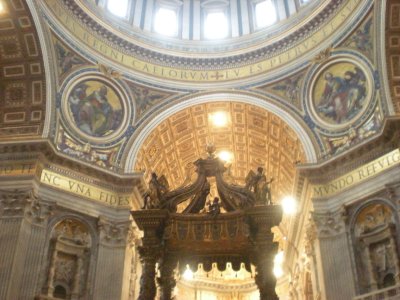 After more gelato, we explored the Vatican side of the Tiber River, and went for a late lloonngg relaxed lunch at a Restaurant in Trastevere that had been recommended to us, called La Scala. It was just the perfect way to end the weekend. The restaurant was quiet, dimly lit, with very few tourists, and the perfect ambience for a long meal! After some rustic, tough on the outside- perfectly soft on the inside bread, I had the most delicious pasta meal. I tend to be pretty picky with my pasta since I’m pretty spoiled at home with papas homemade pasta and mom’s sauce, but this won my approval! Tagliotelli pasta (kind of like thin fettuccini) with an impressively light cheese (maybe cheese and white wine?) sauce, grated parm, cherry tomatoes, black pepper, and zucchini flowers. So good! For dessert, Kristina and I split amazing homemade tiramisu and sipped foamy cappuccinos! And then the waitress surprised us with her favorite dessert wine on the house! What a perfect ending to a fabulous weekend!

Next up…..Amsterdam and Brussels this weekend! What a life!

Hi Mikey - I loved seeing your Rome pictures and hearing the details - I felt like I was back there again. Loved the first shot of you throwing your coin in the Trevi Fountain. We stayed in a small hotel there and could see the fountain from our rooftop deck where we had breakfast every morning. And you must have gone to the AWESOME gelato place near the Pantheon that had 100 flavors...So yummy. Now I want some gelato! Have fun -
Lisa